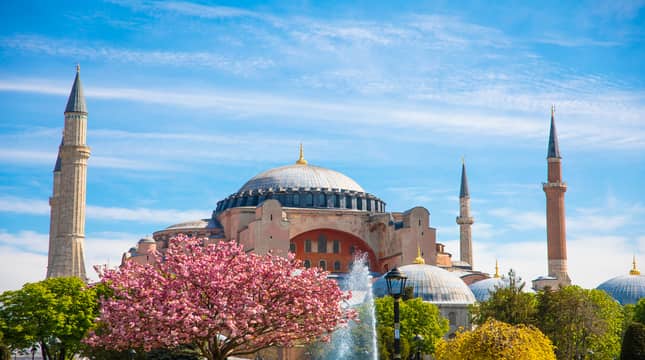 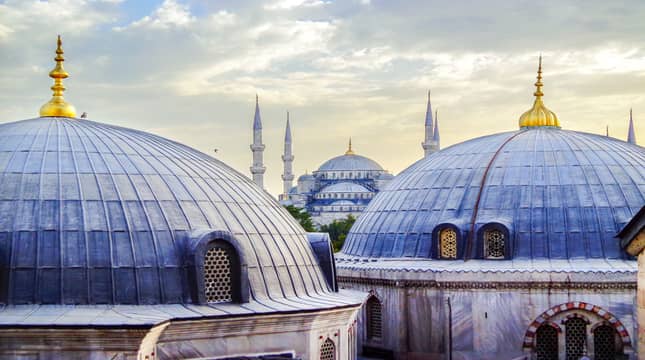 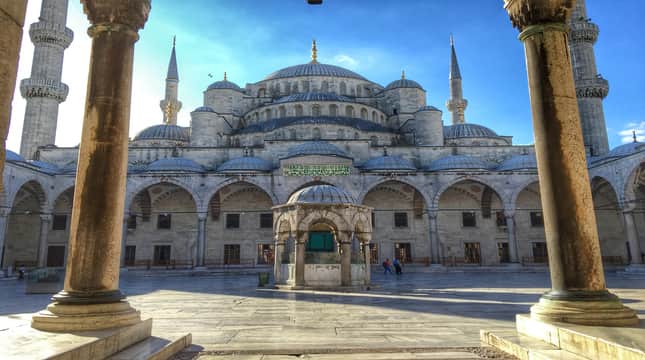 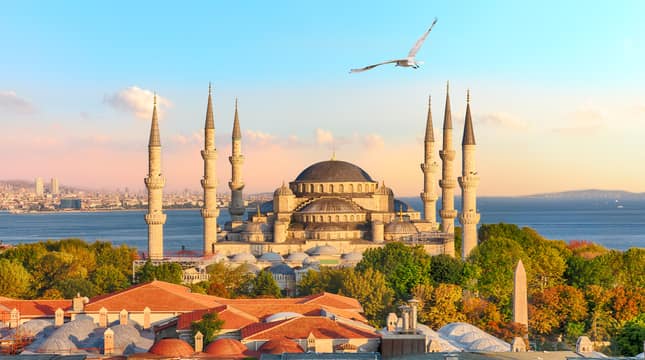 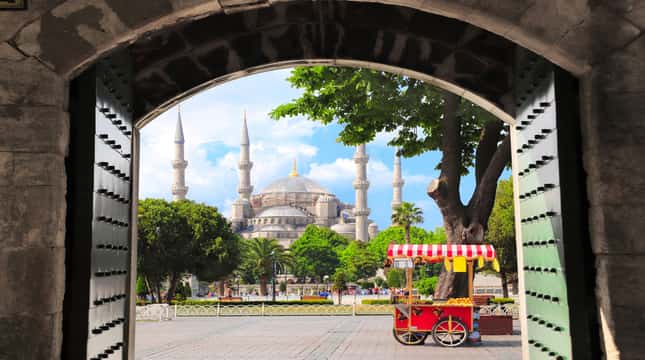 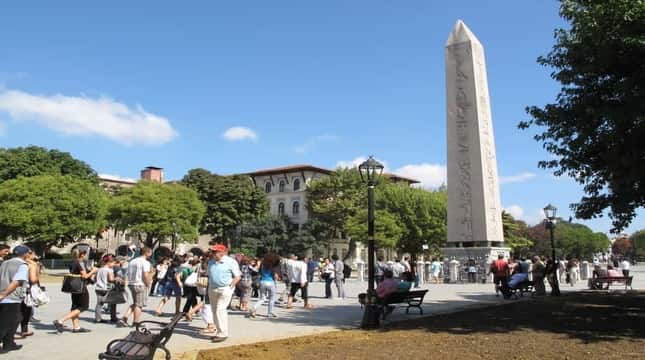 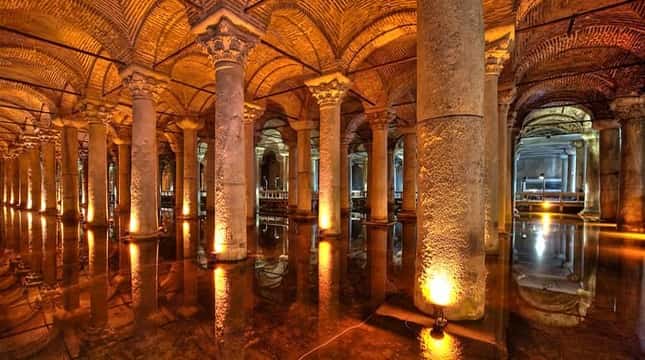 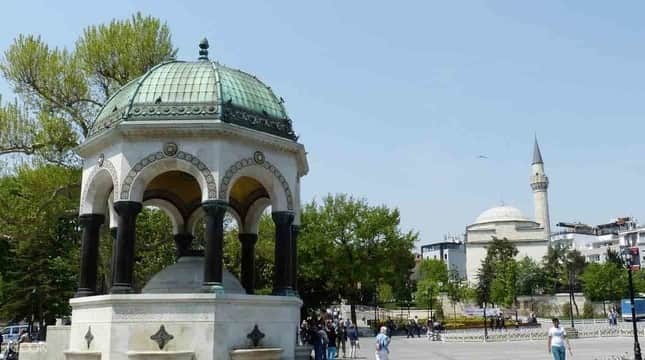 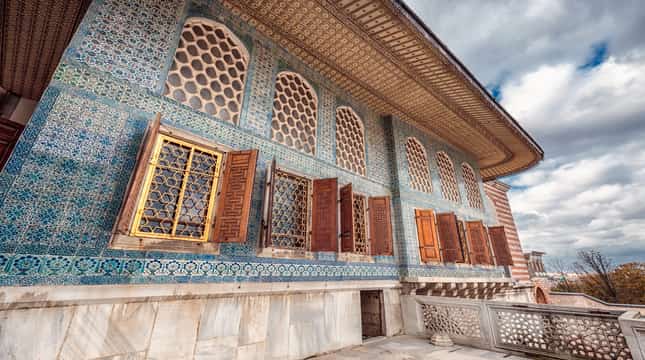 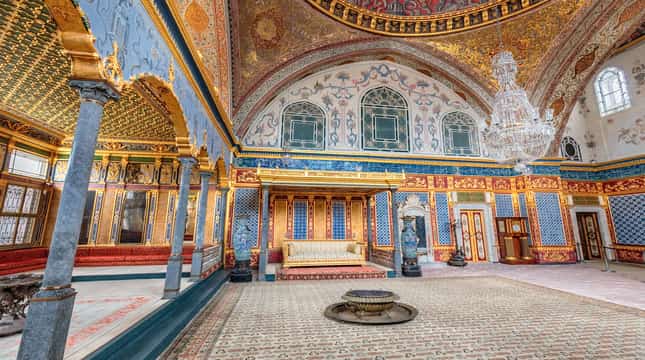 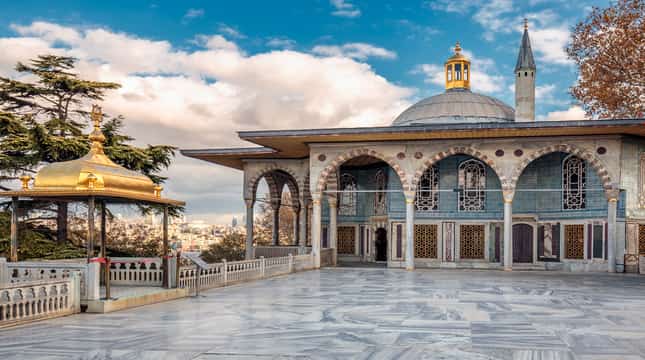 Do not worry for your layover/stopover at the airports of Istanbul. We offer layover/stopover tours from Istanbul Airport or Sabiha Gokcen Airport, if you have a connecting international flight in Istanbul with a layover between 8-24 hour.

Our transferman will be waiting at the Istanbul Airport or Sabiha Gokcen Airport for meeting and transfer you to Old City for a tour of ;

German Fountain is a monument dedicated to the second visit of the Prussian King and German Emperor Wilhelm II in 1898. That was presented in the name of Turkish-German friendship. The plans for the fountain were drawn by the private Consultant of the Kaiser; Architect Spitta and its construction was overseen by the architect Schoele. Its design is typologically like a Şadırvan(Ottoman fountain) rather than a public fountain. Its concept is in Rundbogenstil(round-arch) style, reflecting German neo-renaissance. All of the masonry and metallic structural components of the fountain were prepared in Germany ; the material composed of marble and precious Stones were processed there and the fountain was assembled in its current location after the parts were moved to Istanbul in 1901 by shipping.

Obelisk of Theodosius , was originally set up by Tutmoses III of the 18th Dynasty of Egypt in close to 1450 BC along with a similar one in front of the Temple of Amun-Re at Karnak. Inscribed on the obelisk is an Egyptian hieroglyph script, still clearly distinguishable. The script reads that it was in his father’s honor that Tutmoses erected an obelisk at Karnak and monument in Mesopotamia. Several obelisks were transported from Egypt to Rome. It was Constantine the Great who displaced this one in order to decorate his new capital, yet the delivery took long for unknown reasons. It was during reign of Theodosius I that the obelisk was re-erected in its current place. The stone piece now stands 19.59 meters tall, which is shorter than and most probably only two thirds of its original size. The obelisk is placed on a marble pedestal. On two sides of the main part are inscriptions in Ancient Greek and Latin. Featuring on all four faces are hieroglyphs.

Serpent Column, is a bronze monument from the Roman Hippodrome. While I. Constantine’s establishing the Constantinople; the new Capital of Rome, he brought some of the monumental obelisks established in order to commemorate important historical events previously and with the aim to celebrate to the Hippodrome in order to decorate the new city. One of these obelisks is the Serpent Column. This column is the column in front of the Temple of Apollo at Delphi in the process of the introduction of new capital. The process of the monument erected to the temple of Apollo is also interesting. After the Salamis(480 BC) and Platea(479 BC) victories gained against the Persians invading their homelands , 31 Greek colonies made a boiler of gold, by melting the spoils of war they seized and have submitted it to the Temple of Apollo. This monument is formed from a gold boiler with 3 pedestals embracing one another, 8 meters in height, carried by 29 wreathed three snakes. The heads of snakes separated from each other overlook in three separate directions. On the bodies of snakes, also the names of the 31 Greek sites participated in the war are written. In 5th century B.C, the Persian Empire falls upon various Hellenic cities, yet Hellenes unite against and resist the Persians, coming out victorious from the battles of Salamis and Plataea. The most commonly accepted story has it that this bronze column of a three-headed snake was built using this the melted-down Persian shields, armors etc. also with the addition of a golden tripod boiling pot set on the heads.

Walled Obelisk , formed by hewn Stones in different sizes by walled up. On one side of the marble pedestal, a six verses Greek inscription was treated. Here , “This four cornered majestic and wonderful was ruined, was optimized with respect to the previous image by the Emperor Constantine and by his son Romanos the glory of the state. Rhodes colos was marvelous; this bronze monument creates the fascination”. Kolos mentioned herein was a considerably was considerably Apollo statue located at the harbor of Rhodes and considered one of the Seven Wonders of the World in the first era. As it is understood from the text of the inscription, it was restored by the Emperor Constantine and his son Romanos.

Sultanahmet Mosque(Blue Mosque), was constructed by Sedefkar Mehmet Aga under the command of Ahmed I in 1609-1617. Almost all the interior parts of this huge mosque is covered by tile. The tiles of which blue and green(turquoise) colors are dominant, form more than twenty thousand panels. The interior part that is lightened by light creeping from 260 windows is bright enough. Because of these colors, it is known as the “Blue Mosque”. Marble of workmanship, mother-of-pearl workmanship and woodworking are also high quality. Sultanahmet Mosque has six minarets. Four minarets with three balconies were built on the four corners of the mosque; the remaining short minarets with two balconies were built on two corners of the courtyard. Until the construction of Sultanahmet Mosque , only Masjid al – Haram in Mecca had six minarets. As Ahmed I constructed the mosque that was named after him; one more minaret was added to Mescid-i Haram.

Topkapi Palace , was constructed between the years of 1460 and 1478 during the reign of Sultan Mehmed II(The Conquerer). It has been the seat of government for the Ottoman Empire. It was home to the Sultans and their families until the reign of Sultan Abdulmecit. This is why , it has a very rich collection of porcelains , robes, weapons, shields, armors, miniatures, Islamic calligraphic manuscripts as well as Ottoman treasures and jewellery.

Hagia Sophia , built by Constantine the Great in 325 on the remains of a pagan temple. Rebuilt by Justinian and Theodora. Described as greatest church in Christendom, is certainly a masterpiece with a synthesis of the Occident and the Orient. In 1453, Mehmet The Conquerer added minarets to the huge, soaring dome and turned the former church into a mosque. The building controversially became a museum in 1934. As of 24 June 2020, Hagia Sophia back into a Mosque. Icons of the Virgin Mary and infant Christ are covered by fabric curtains.

Grand Bazaar , was founded in 1461. It is the oldest and biggest closed bazaar of the World. Like an enormous labyrinth, it is a spectacular and unique part of Istanbul with 60 streets and over 3600 stores. The Grand Bazaar offers a wide range of products from copper to glazed tiles, from marriage articles to ready wear, and from various handicrafts to all types of spice. Western writers often mention the Grand Bazaar in their memories and travel journals.

End of tour transfer back to airport. 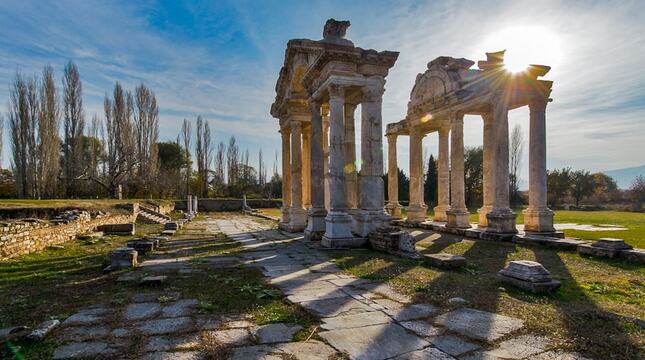 We offer day trip to Pamukkale and Aphrodisias from Istanbul by flight everyday. Pamukkale and the adjacent ancient city of Hierapolis are... 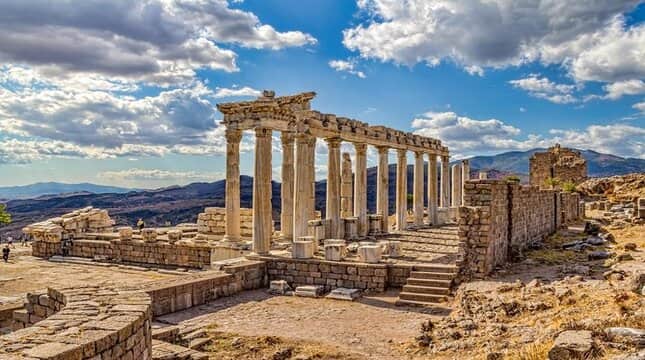 We offer 2 days 1 night trip to Ephesus and Pergamon from Istanbul by flight everyday. First flight destination may change due to flight sc..